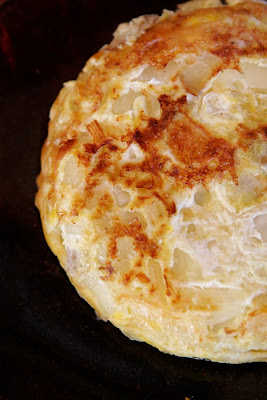 While I was in Spain last month, one of the things that we were served everywhere in parts of Andalusia and as far north as Madrid was "Spanish Tortilla". It's what I would probably call a frittata here in the U.S. Spanish Tortilla is easy to make, simple, filling, and delicious. I used a recipe from Tyler Florence that tasted very similar to what I had in Spain. This is yummy served with slices of fresh tomatoes.

In a medium bowl mix the potatoes, onions, and 1/2 teaspoon salt by hand.

Heat 2 tablespoons of the oil in a large non-stick frying pan. Fry the potatoes and onions on low heat and cover with a lid for 5 minutes to let them soften. Turn up the heat for another 5 minutes until golden brown. Remove from the stove and drain off any excess oil.

Meanwhile break the eggs into a medium bowl. Add the remaining salt and milk and whisk vigorously until frothy. Add the potatoes and onions to the eggs and mix until fully integrated.

Clean the frying pan and return to stove.

Heat the remaining 2 tablespoons of oil on a high heat and pour in the mixture, moving it around in the pan to help the tortilla to rise. Fry until golden brown, stirring occasionally until it has set. Then turn down the heat to allow the inside to cook. After a few minutes turn up the heat in order to brown the tortilla.

When it's cooked place a large plate over the frying pan and flip the tortilla onto it. Return to the pan and fry the other side until golden brown. 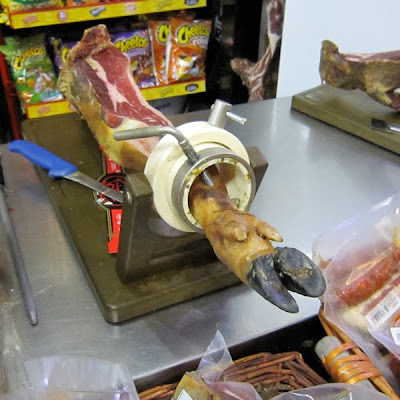 This is a very typical sight in spain. Aged jamón (air-dried, cured pork), is sold on the hoof and can be priced as high as $94 per pound, depending on the pig's diet, length of aging and so forth. 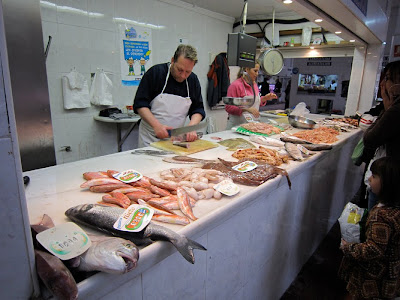 This is a local fresh fish market in Malaga. My sister and I wandered through obscure streets and found this place. The people in the market were clearly not used to tourists sauntering in, but were pleased to sell us anything we would pay for. 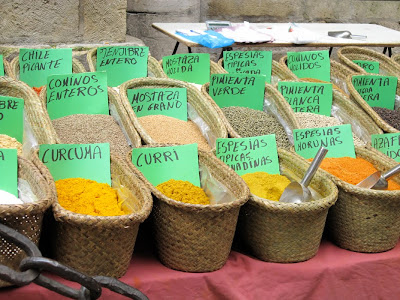 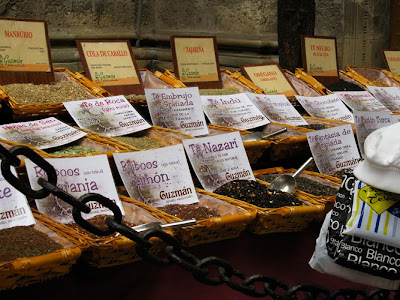 Moroccan spices are sold on the streets everywhere in Southern Spain. Morocco is only a 45 minute ferry ride away from the tip of Spain.
Posted by Miriam Latour at 1:42 PM 1 comment: 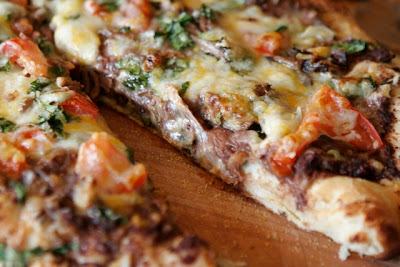 I was craving the Chichen Itza Pizza I made a while back, when I realized that Cinco de Mayo was coming up and it was about time I did a pizza in honor of it. Okay, so I'm French. And the day is a celebration about victory against the French. But I've spent a lot of time in Mexico and I happen to love not only Mexican food, but the border food that has been spawned out of the traditional. This is definitely not any more authentically Mexican food than the Chichen Itza Pizza was authentically Aztec, but does that matter if it tastes great? No, says I.

Cinco de Mayo Pizza
This Crust (I recommend that you pre-cook this 5 minutes. I didn't, and it was really difficult to move with the heavy toppings.)

Preheat oven to 525ºF. Saute onion and chili pepper in olive oil. Roll out dough (pre-cook if desired), and top with beef, beans, onion & chili pepper, tomatoes, cilantro, and cheeses. Bake on a pizza stone for 13 minutes or until done (watch closely). 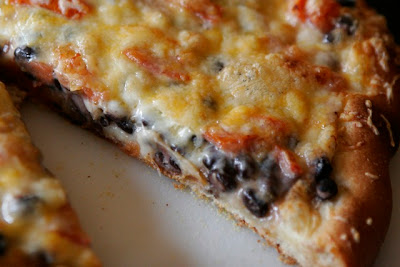 My daughter can't eat beef (intolerance) so I sometimes do a vegetarian or poultry version of dinner for her. Toppings on this pizza were simply black beans, fresh salsa, and a combination of Cheddar, Queso Quesadilla, Monterey jack, and Asadero cheeses. 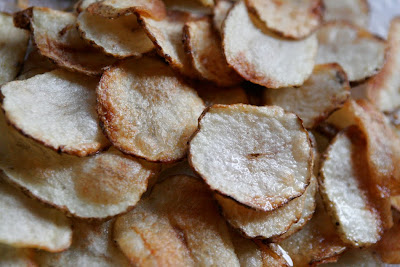 I've been a bit out of it with cooking, so my kids have taken over. My son Isaac makes these fabulous crisps (potato chips). He's skilled with a knife and can slice the potatoes super thin. Yeah, so frying foods isn't the most healthy way to go, but it's better to fry at home than buy a bag of these suckers. You can control the saturated fats by using the right kind of oil, and lower the sodium content. And the taste way outshines what you get in a bag at the grocery store!

Isaac's Healthier Crisps
This is more of a suggestion than a recipe, since Isaac doesn't really measure while cooking

Scrub and slice as thin as you can several Yukon or russet potatoes (or try other varieties)
Heat one inch of canola oil in a large frying pan to medium-high
Fry potato slices in single layers until brown and crisp
Drain on paper towels and sprinkle with sea salt and/or herbs, spices and flavorings of your choice

Note from Miriam: I use my Kitchen Aid to slice the potatoes.

And while I'm being proud of the fact that my kids like to cook, I'll add in this bonus photo of Isaac's French Toast from breakfast: 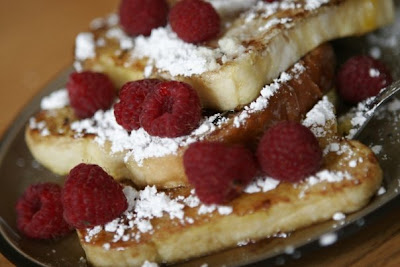 Isaac's French Toast
Whisk a couple of eggs with a tsp of milk and a sprinkle of cinnamon. Soak slices of homemade bread in the egg mixture then cook until done on each side in melted butter in frying pan on medium heat. Top with fresh raspberries and powdered sugar.
Posted by Miriam Latour at 9:27 AM 1 comment: 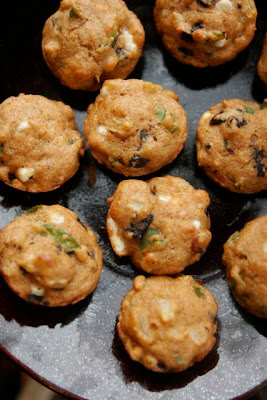 These yummy little savory muffins are adapted from a Fitness Magazine recipe, and at 39 calories each, make a great between-meal snack. They are made from nutty whole wheat and loaded with the flavor of kalamata olives, feta cheese, onions and green peppers. The original recipe can also be found on the Food Network site as well as eatingwell.com. My version is slightly different, but the same concept.

1. Heat oil in a large skillet over medium heat. Add onion and bell pepper; cook, stirring often, until the onion is tender, about 5 minutes. Transfer to a large bowl and let cool for 10 minutes.
2. Meanwhile, preheat oven to 400 degrees F. Coat a mini-muffin pan with cooking spray.
3. Whisk flour, baking powder, oregano, sugar, garlic powder and salt in a medium bowl.
4. Stir milk, feta, egg, tomato paste and olives into the onion mixture. Make a well in the dry ingredients; add the wet ingredients and stir until just combined. Fill the prepared muffin cups two-thirds full.
5. Bake the muffins until lightly browned, 13 to 15 minutes. Cool in the pan for 5 minutes before turning out onto a wire rack. Serve warm or at room temperature. 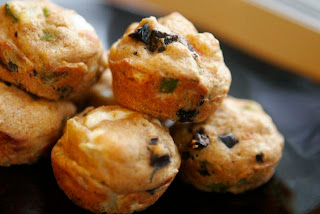 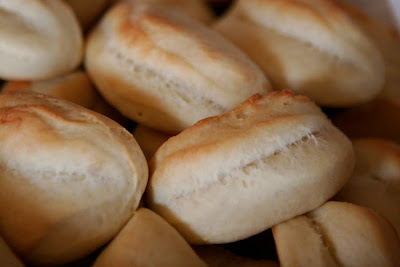 For special occasions these light, buttery rolls are a tradition in my family. My sister-in-law, Janece, gave us this recipe over 20 years ago, and Dave makes them for holiday dinners. This year I made them for Easter dinner and decided to share the recipe with you. Normally I recommend whole wheat and something a little more healthy, but it's great to celebrate once in a while with bread that tastes like it was cooked by a faerie. The quote above these rolls in our family cookbook says, "Light as faerie wings and rich as faerie kings."

Combine hot water and butter. Allow to cool to 110ºF. Add yeast. Blend in eggs. Add sugar and salt. Mix in flour and baking powder and knead for 10 minutes. Cover and put in warm place to rise until double in size. Punch down and form rolls. Dip each roll in melted butter and place on a cooking sheet. Cover and allow to rise again to double. Bake at 400ºF for 15 minutes or until lightly brown.
Posted by Miriam Latour at 3:05 PM 1 comment: