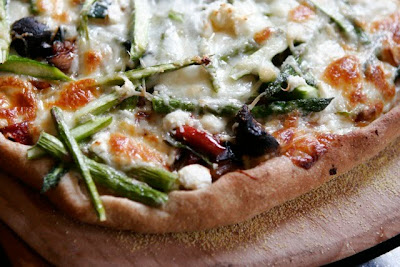 If you haven't noticed, I love making pizza. Pizza dough is like a canvas to paint on, and you can be as creative or funky as you want. It's spring, and for some reason every blogger in the world seems to use asparagus in some spring recipe. I'll be honest, I'm not a huge fan of asparagus. I don't dislike it, I've just had too much of it over the years. It used to grow wild in our yard and take over our grass, so I think of it as a weed. But, it is a pretty vegetable, and contains lots of nutrients that we need, so I used it in this recipe. I'm glad I did, because I love this pizza! I've played around with the idea of putting potatoes on pizza, but never tried it until now. It works! Potatoes taste good on pizza.

In a large mixing bowl, dissolve yeast and sugar in water. Once it is bubbly, add olive oil and salt. Stir in lethicin and gluten, and add flours, kneading until it forms a smooth ball. Allow to rise double (about 1 hour), divide into two pieces, roll out for pizza.

*This dough will work without the lecithin and gluten, but works much better with them.

Preheat oven to 500ºF. Rub pizza dough with olive oil. Sprinkle with minced garlic and green onion. Spread cooked potato slices over the top. Top with cooked veggies. Scatter uncooked, drained asparagus over all. Finally top with three cheeses. Bake on a pizza stone or pan until dough it browned and cheese is melted.

Potato Soup With Parsnips and Leeks 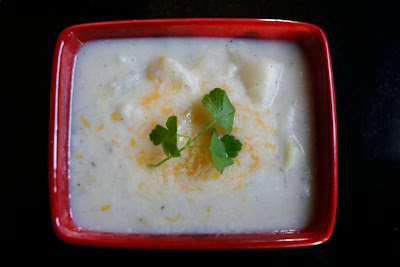 Creamy potato soup seems like a winter dish, but I created a light version and added parsnips, which sweeten up the flavor and make it just right for spring.

Potato Soup With Parsnips and Leeks

In a large pot saute leeks and garlic in olive oil and butter until tender. Add potatoes and parsnips. Cover with broth and add tarragon, rosemary and salt. Simmer until tender. Add milk and heat thoroughly. Blend about half of the soup until smooth. Add back into the pot. Heat through. Serve topped with a little shredded cheese if you wish.
Posted by Miriam Latour at 1:17 PM No comments: