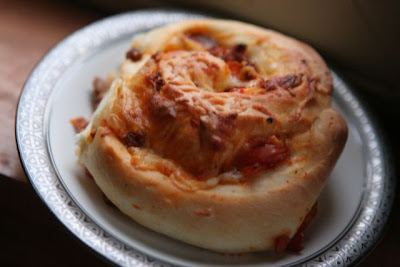 Pizza Rolls are a holiday tradition at our house. They are pretty much like cinnamon rolls, only stuffed with pizza toppings.

Dough:
Scald and set aside to cool:
1 cup milk

When the above steps are completed, combine them and add 6 1/2- 7 cups flour and 1 tsp salt. Knead well and place in a greased bowl. Raise until double and divide in half. Roll out into two rectangles. Spread with pizza sauce and sprinkle with pizza toppings, such as cooked sausage, olives, ham and cheese. Roll and cut like cinnamon rolls. Place on a cookie sheet and allow to raise for 30 minutes. Meanwhile heat oven to 375ºF. Cook rolls for 15 minutes or until done. Serve hot. (I usually make half of the dough into cinnamon rolls and half into pizza rolls so that we have dessert too.) 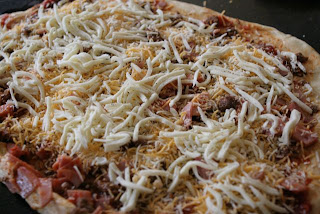 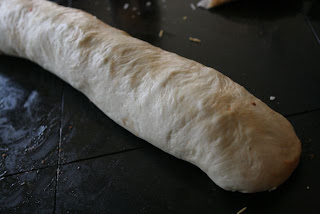 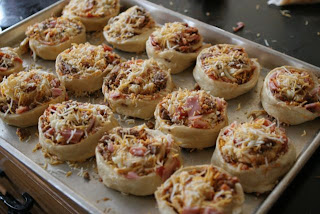 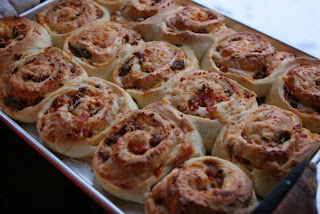 Posted by Miriam Latour at 5:02 PM No comments: 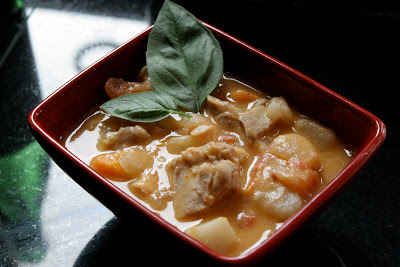 Peanut stew is a common street food in The Gambia. This recipe is simple, using peanut butter and crushed red chilli pepper as the main flavors.


In a large pot cover the potatoes, yam, turnip, and onions with water, and boil until tender. In a medium pot, cover the chicken thighs with water, add salt, and boil until cooked.  Removed the chicken from broth and cut into bit-sized pieces.  Add chicken to the vegetables.  If necessary, add some of the chicken broth to the vegetables and chicken.  Add the peanut butter and gently stir. Add red pepper and salt and black pepper to taste.  Allow to simmer for 20 minutes or until flavors are blended and stew is thickened.  Serve hot. 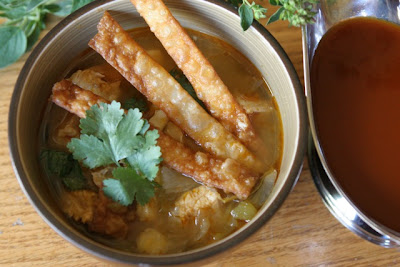 My sister's nephew said I need to cook some yummy Mexican dishes, and he chose pozolé as his dish of choice. I've never made pozolé, so I'm not sure how authentic mine is, but my family sure loved it, and so did I. This is based loosely on a recipe I found at Food.com

Cover the pork with water in a pot. Toss in the onion, garlic, salt, pepper and seasoning. Bring to a boil, cover and simmer for 45 minutes.

In a small saucepan, cover the chilies with water. Boil for 15 minutes. Blend in blender with raw onion and garlic until smooth. Strain to remove chunks. Put aside this chilli sauce to be used as a garnish (I added about 1/2 of it directly to the pozolé.

In the bottom of a large pot, sauté the onion in the oil until tender. Cut the cooked pork into chunks, reserving the broth left over. Pour the pork broth and chicken broth over the onions. Add pork chunks. Add the hominy, chili powder, salt, pepper and green chilies. Bring to a boil, reduce to simmer and cook for 1 1/2 hours - 2 hours, until pork is tender. Add fresh oregano and cilantro and some of the chilli sauce, if desired.

Step four:
Pozolé is meant to be served with many garnishes. I fried up some tortilla strips and served fresh cilantro and oregano and lime juice on the side., It is often served with shredded cabbage, radishes, and lime wedges as well.

Put all the ingredients except the cheese and tortillas into a big pot and simmer for 1 1/2 hours, or until flavors are melded. Top each bowl with grated cheese and use tortillas to scoop it up.
Posted by Miriam Latour at 6:19 PM No comments: 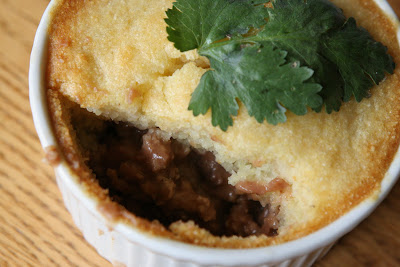 I'm playing around with stuff cooked in a ramekin. Part of this has to do with me being surrounded by family who all cook, and being left to cook for myself. I'm finding that it's a good way to eat less, keeping my portions small. Individual desserts are good too.

In a cereal bowl combine butter, sugar, egg white, soda, cornmeal, flour, salt and yogurt. Mix until blended. Place beans, chicken and salsa (salt to taste) in the bottom of a ramekin. Top with cornmeal mixture. Cook at 300ºF in a toaster oven for 20 minutes or until cornbread is golden and done. Top with fresh cilantro, sour cream, cheese, salsa, etc.
Posted by Miriam Latour at 1:58 PM 1 comment: 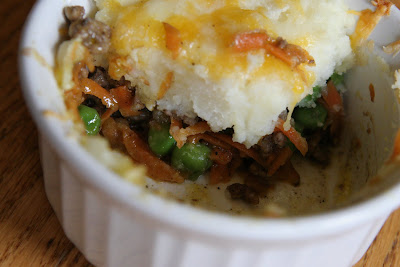 I'm playing around with stuff cooked in a ramekin. Part of this has to do with me being surrounded by family who all cook, and being left to cook for myself. I'm finding that it's a good way to eat less, keeping my portions small. Individual desserts are good too. Also this.

In a small frying pan, brown lamb. Remove and set aside. Cook carrot, onion and garlic in oil left in the pan until tender. Return lamb to pan. Sprinkle with corn starch, and add chicken broth, stirring over heat until slightly thick. Add fresh chopped sage, oregano and salt and pepper to taste. Add peas and cook until barely tender.

Divide mixture between two ramekins and top each with mashed potatoes and shredded cheese. Bake in toaster oven at 350ºF for 8 minutes.

Posted by Miriam Latour at 12:52 PM No comments: 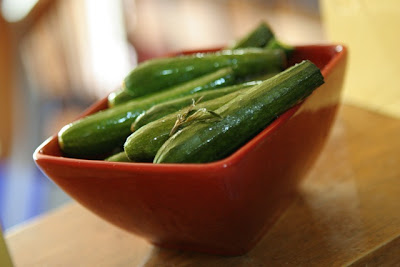 These tiny zucchini are about the size of my finger. So sweet and yummy.

Preheat oven to 400ºF. Coat baby zucchini in olive oil. Place them in a single layer on a cookie sheet. Sprinkle liberally with salt. Tear fresh basil and oregano and sprinkle the herbs over the zucchini. Bake for 20 minutes.

Posted by Miriam Latour at 12:37 PM No comments: 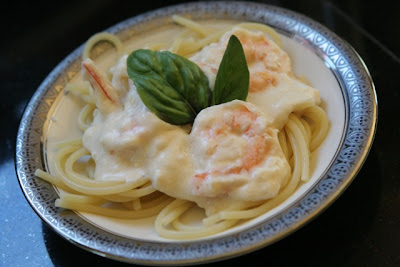 You may have noticed that my kids are taking over my blog cooking for me, while I'm too busy with graduate school to cook/bake. Elijah is my youngest (13), and he avoids the camera like the plague, but I managed to catch him making shrimp... for breakfast. I watched and recorded what he did. This is his own recipe.

Saute garlic in butter until tender. Make a roux with garlic butter, and flour. Slowly add half and half and cook until thick. Sprinkle with salt, pepper and fresh herbs, add raw shrimp and cover. Cook just until shrimp is pink. Serve over pasta.

The last photo is of Eli's butter-garlic shrimp over rice from another day. He simply sautes the raw shrimp in butter and freshly crushed garlic.
Posted by Miriam Latour at 12:25 PM No comments: 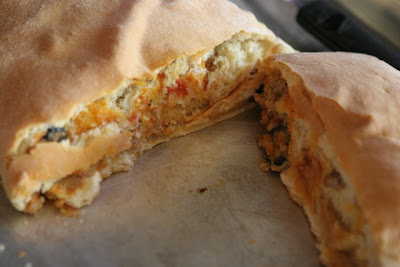 Pizza-Stuffed Bread
Scald and set aside to cool:
1 cup milk

When the above steps are completed, combine them and add 6 1/2- 7 cups flour and 1 tsp salt. Knead well and place in a greased bowl. Raise until double and roll out. Spread with pizza sauce and sprinkle with pizza toppings, such as cooked sausage, olives, and cheese. Roll up and place on greased cookie sheet and allow to rise again. Bake at 375º for 40 - 50 minutes until brown and done in the middle.

Posted by Miriam Latour at 12:20 PM No comments: 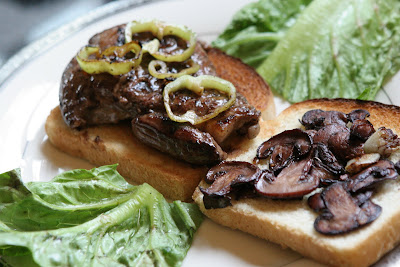 I love that my kids all cook, and so I covertly photographed my teenage son, Isaac, making his own breakfast: with mushrooms cooked in carménère, fresh garlic and butter and topped with sliced Anaheim pepper and lettuce. The best part was watching him pull out a porcelain plate and arrange the sandwich before setting it on the table to eat.

Saute mushrooms and pepper in wine and butter, set aside . Cook steak , rubbed in garlic and salt and pepper, in oil until medium-rare, while at the same time in the same pan, cook the pepper slices until tender-crisp. Toast bread, top with mushrooms, steak and peppers. Top with fresh lettuce. Eat. Repeat, if you are a teenage boy.

Posted by Miriam Latour at 2:33 PM No comments: 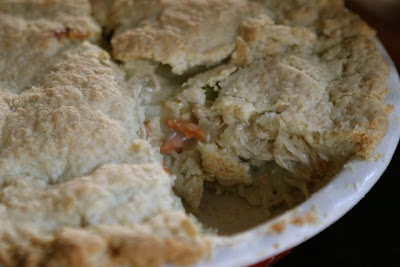 This crust recipe was given to me by a classmate, Bobby. It's really delicious and I love the texture.

In a saucepan, cover the veggies with just enough broth. Add seasoning and salt & pepper to taste. Cook until tender. Mix in corn starch. Add milk and cook until thickened. Pour into 1/2 rolled out pie crust. Top with other 1/2 crust. Bake in preheated oven at 425ºF for 35 minutes. 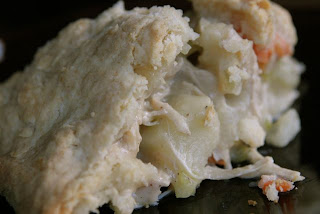 Posted by Miriam Latour at 4:31 PM No comments: 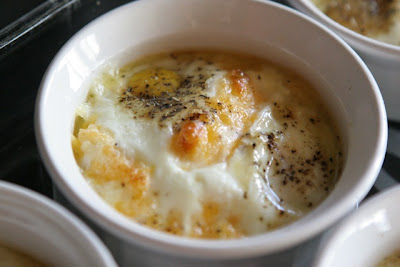 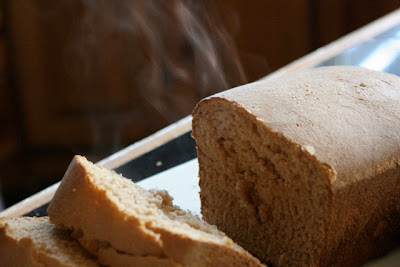 Notice the steam rising from the hot bread. Mmmmm.

Oeufs en Cocotte is a French dish. It can be cooked with mushrooms, ham, smoked fish, veggies, just about anything you like with eggs. Sauces in the bottom of the ramekins are good too. Marinara sauce, Alfredo sauce, Salsa, etc. This recipe is very basic with butter and cheese in the bottom and cream on top. Get creative! And be sure to serve these with Dave's Butter-Wheat Bread (recipe below). This is Dave's own recipe, and it is my favorite bread lately, so rich and hearty and wonderful!

Place pat of butter in the bottom of each ramekin. Top with 1 T cheese. Drop two eggs carefully over cheese. Spoon 1 T cream/milk over eggs. Sprinkle with salt, pepper, herbs and spices. Bake in a 350ºF oven for about 30 minutes or until cooked with soft yokes (to taste). Serve with Dave's Butter-Wheat Bread.

Put all of the ingredients in a large mixer bowl. Mix using the paddle (rather than the dough hook). Dave suggests beating it for 10 minutes on medium. Dough is sticky. Cover and allow to rise in a warm place until double. Shape and place in greased 9"x 5" loaf pan. Allow to rise about 60 - 70 minutes until it crowns the pan by about 3/4". Bake at 350ºF for about 45 minutes or until done.

Posted by Miriam Latour at 4:08 PM No comments: