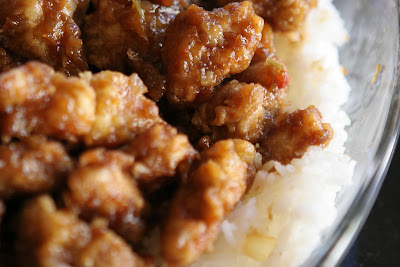 This recipe is adapted from several recipes online and changed to fit my own tastes.  My son who asked me to make orange chicken, loved it, as did all of the family.  I even liked it, and I'm not all that fond of orange chicken.  This one isn't as sickly sweet at the casual restaurant versions.

Directions
Place chicken pieces in large bowl. Stir in egg, salt, pepper and 1 tablespoon oil and mix well.
Stir cornstarch and flour together. Mix flour mixture and egg mixture. Add chicken pieces, stirring to coat. Heat oil for deep-frying in wok or deep-fryer to 375 degrees. Add chicken, small batches at a time, and fry 3 to 4 minutes or until golden crisp. 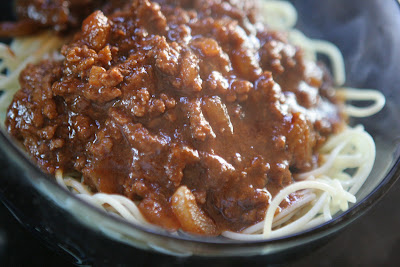 I was introduced to Cincinnati Chili by my sister who married a Floridian, my BIL, Ed. She directed me to this recipe the other night, when my son asked me to make Cincinnati Chili, like his aunt makes.

From Wikipedia: Cincinnati chili (or "Cincinnati-style chili") is a regional style of Chili con carne characterized by the use of seasonings such as cinnamon, cloves, allspice or chocolate. It is commonly served over spaghetti or as a hot dog sauce, and is normally of a thin, sauce-like consistency, unlike most chili con carne. While served in many regular restaurants, it is most often associated with several restaurant chains such as Empress Chili, Skyline Chili, Gold Star Chili, Camp Washington Chili and Dixie Chili. Restaurant locations are found pervasively in the greater Cincinnati area with franchise locations also throughout Ohio and in Kentucky, Indiana, and Florida. Restaurants that feature Cincinnati chili are frequently called "Chili Parlors."